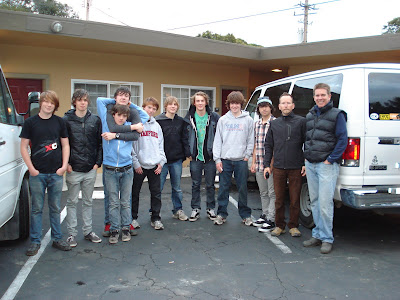 Well…what else can I say other than Sunday was a great day for Tam! Although this is a team sport, and we have an incredible assembly of riders and racers, I am very proud of your personal efforts on Sunday. Its extremely rewarding for me to see how everyone is improving during every ride and race.

Saturday afternoon the team caravan headed south to Monterey in what was somewhat dodgy weather conditions. Along the way we fueled up with a combination of Z Bars and Turkey jerky. Without hesitation we cruised to the course to get in some warmup laps. Motivated to stay on the bike by blankets of poison oak the team took a cruise through the course with an intentionally slow first lap. We then headed out for a second quicker lap, whipping through the swishy single track, and then some took a third. The course was decidedly faster and less technical than Granite Bay but did have some sections that dictated careful gear selection and to carry good speed through.
After checking into our hotel the team headed across the street to tuck into a proper pre-race meal. Spaghetti and meatballs for the coach and assorted pulled pork sandwiches and other fair for the racers. According to Blair it was “decidedly an upgrade from Caruso’s”. After dinner the team hosed off and cleaned their bikes, readied their gear for the next day and got to bed at a reasonable hour.
Race day greeted us with unbelievably clear and warm conditions…perfect race weather! In the end we had a total of four podiums, including the top step that Dillon C was gunning for as redemption from his Granite Bay technical meltdown. Four podiums from fourteen racers…I’m guessing our podium percentage, at close to 30%, was the highest for the day by about a mile. Albert had a tough technical with one of his brakes but will be back next race just a little bit faster.
As I said before….everyone…your efforts were amazing. I would like to highlight some stand-out performances that deserve a special call out:
A quick rundown of how we placed:
Varsity
5th, Spence
27th, Bob
JV
25th, Bjorn
Sophmore
1st, Dillon C
3rd, Dominik
4th, Dylan
22nd, Jack
Fresh
7th, Laird
16th, Ryan
30th, Cody
32nd, Isaac
37th, Shane
41st, Max
dnf, Albert (mechanical)
Now…..onto the next ride!
-paul
Read More 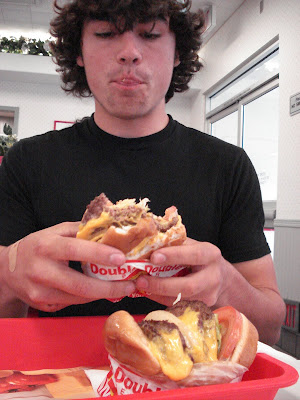 We’re going BIG tomorrow. Up Railroad, down Coastal and up and over Diaz Ridge. Leaving the Depot at 3:30 sharp. No waiting….you snooze you loose.

We came, we shredded and took some serious hardware. 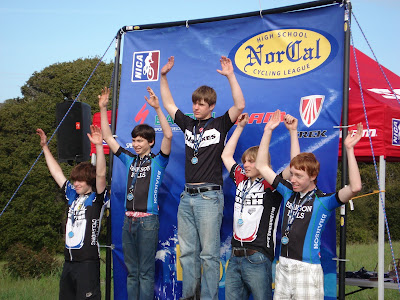 Three outta’ five spots…including D-Char up top. Great day team! Everyone had a big day. More from the race to come. Stay tuned.

Team Van departs Tam High 12:30 on Sat (eat already or bring lunch). Van athletes bring $$ for dinner and breakfast. Parents can write a check or PayPal me for motel cost later. Everyone refer to the race gear checklist found on the NorCal League site here. Bring extra kit for the muddy pre-ride.

Very special thanks to the Allens for providing post-race food!!

If you are racing on Sunday and need a ride down please contact Blair asap. We have two spots left in the van which is leaving from Gus Gym at 12:30pm Saturday. The van lessens our carbon footprint and saves everyone money. Plus….how can you not have the “team van experience”? It does take time for Blair to organize all of this so please let him know if you need to take advantage of the van.
We’ll be pre-riding the course Saturday afternoon as a team so you don’t want to miss it. We’ll then be doing a pasta carbo-loading feed Saturday night.
More info to come!
-paul
Read More

Bob has set an outstanding example for his team throughout training rides and races this season. He’s faced adversity in our first two competitions and pressed on, showing his team the true spirit of competition. He is looking forward to the balance of the season and continuing to set the bar high for his teammates.
I would like to thank Travis for serving in the role to-date. As some of you know Travis is working on an internship during his senior year, one that finds his schedule extremely tight. As a result his participation has been limited, but enthusiasm for the team remains high. He served as Team Captain during the critical start of the 2011 team and assisted Blair and myself in getting the team launched. Thanks Travis!
Now…who’s ready for Sunday!
-paul
Read More

Tam Team in the Marin IJ

In case you missed it we are in the Marin IJ as a round up of the teams racing in Marin in the Norcal League. Check it out! And lets hope for better weather on Wednesday!
-paul
www.marinij.com/prepcentral/ci_17654346?source=pkg
Read More

Reports are calling for more rain to occur during our ride. In light of the unsettled conditions todays ride is cancelled.

…is probably off due to pending inclement weather but check back tomorrow morning for the official word.

Sunday greeted us with cool weather, great enthusiasm and an extraordinarily early start thanks to daylight savings time. (I know I slept like a rock on Sunday night and am sure everyone else did too.)

I want to personally congratulate each of you who raced on Sunday. I commend everyone for their great effort. In short, we had a great day! In addition to being pleased with all of the individuals we have racing I am particularly proud of the team itself. Observing the team atmosphere everyone is embracing is what a great team is all about. Race days can be intense and a little unsettling for riders. Having the support of teammates, friends you can depend on when you need them, is the mark of a successful team. I was also very happy with everyone’s conduct throughout the day. Good sportsmanship is a sign of confidence. Being humble when you have a great day and controlling your actions when you have a tough day is perhaps harder than racing itself and, in the end, counts for so much more. Lets keep the great race conduct and team dynamic going.

On the racing side of things I’ve been combing through the results and comparing lap times to the prologue. Albeit a change of direction the course was essentially the same.

As I said before I am very pleased with everyone’s effort on Sunday. You all did amazing! I would like to call out a few notable rides of the day.

Bob represented the varsity squad and once again set an example that everyone should look to. With a tumble before race day and some very sore ribs he was unsure about racing but went to the race with bike in tow just in case. After taking a warmup lap, and with a quick consult from his mom and me to ensure his safety, decided he could indeed race to simply garner points for the team. And so the varsity race went and so, also, did Bob. Two races and two great examples for his team. Keep it rolling Bob.

Jack came back from a very tough prologue in fine fashion. His last trip to Granite Bay found himself pushing his last possible pedal stroke as he crossed the finish line completely cramped, unable to turn another pedal. He lost over eleven minutes in that last lap. Well…Sunday was a little different. With a lot of homework and dedication to his fueling he scorched his last lap on Sunday, beating his prologue last lap time by a dizzying twelve minutes. Perhaps a more incredible feat was his last lap of the day, losing a measly two seconds over his second lap. Great consistency and a great job Jack!….and keep drinking.

Dominik opened up with a slightly slower first lap while marking his man. Him and another rider were on a two man race leading breakaway from the go. He then proceeded to drop three minutes from his second lap, keeping his breakaway nemesis on his wheel. He then proceeded to drop four minutes from his last lap as well as his breakaway companion. In cycling lingo he simply “rode him off his wheel” or “dispatched” him. That lung burning effort found him on the top step of the Sophmore D1 podium. Great effort and even better tactics Dominik.

Dylan K proceeded to move up one step on the podium from the prologue, finishing a strong fifth with an overall three minute improvement over his prologue time. Congratulations Dylan on an outstanding effort.

Thank you to Bob’s mom Megan for her assistance with set-up and tear down and feedzone support. As I was telling Megan during the race its usually a boring job but there are sometimes in a race that one decisive lap, and two of our riders come around and they are both in severe need of a hand-up, and its sometimes that one second of one hand-up that makes all the difference in the world for the racers. Five hours of boredom, ten seconds of excitement.

Thank You. I would also like to thank Gail and Doug, Dylan K’s mom and step-dad for providing a great post race meal of hot chili and pasta along with plenty of trail mix, cupcakes and chips. The team and I truly appreciate your support for the race and judging by the amount of chili we went through (12 cans?) your choice of food was perfect.

Team Wear. On a slightly different note…I would like to ask the parents/guardians if they would be willing to purchase an “off the bike” clothing item for their racer and themselves? I would like to give you and the racers the option of buying a very cool, yet to be designed jacket, that shows their friends that they’re shredding with their team twice a week and racing to boot!
• If so, how much would you be willing to spend on a jacket?
• How many would you like to purchase? One for yourself maybe?

Lost and found. We have a black Tam Bikes jersey, size large that was left in the van. Please let me know if this is yours.

The “Team Van” has been a big help. Rich and Megan own the van and have generously offered us its use during race day. We will need to settle up with gas money shortly, a nominal fee that is much cheaper than driving to and parking individually at races. We do have limited space in the van so I urge you to sign up with Blair as soon as you can. It gives the kids the added “race day team van” experience that they really enjoy.

China Camp. Its coming….I’ll give you more details once logistics have been worked out but we will be taking a field trip for a change of venue. Stay tuned.

Finally, each school has been asked to supply volunteers for the race itself…outside of helping out our respective team. I will get more information to you later but wanted to give you a heads up.

Thanks again everyone. If anyone has been left off this communication that should have been included please let me know.