Tam swims with the Sea Otter 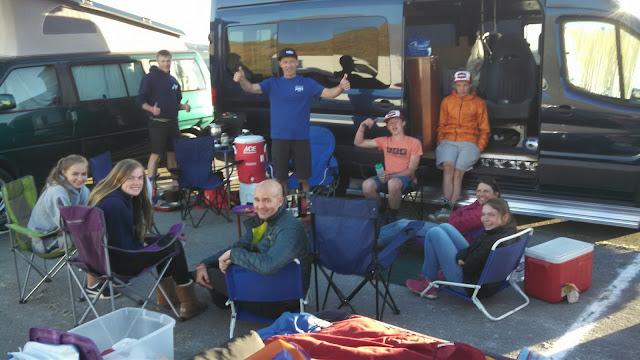 Tam had a great showing at the annual Sea Otter Classic, the largest cycling event in North America.

12 athletes, coaches and  ride leaders took to the trails and faced the grueling hills and record breaking  heat of the day. Let’s just say that the team had an amazing showing, facing some the of the nation’s fastest mountain bikers.

Clayton Puckett had a stellar race in the lightning fast Category 1 (17-18 ), a 29 mile race, finishing 11th racing for the Bear Development Team and continuing an impressive resume of spring season finishes.Congratulations to Clayton and the rest of the Bear Development team.

Julian LePelch and Liam Howard rode together pretty much the entire 29 miles of their Category 1 (15-16) race, climbing 3,600 feet and covering that distance in an amazing average speed of 14.5 miles per hour! They sprinted for the finish and their times were identical at 1 hour, 56 minutes and 48 seconds, Liam winning by a whisker. They both finished just ahead of Jake Yackle, who was last year’s 15-16 National Champion! They came in 11th and 12th. This was Julian’s first Cat 1 race having just qualified for this status.

Ethan Frankel entered 3 events, including the road race the circuit race, along with the Cat 3 (17-18) cross country race in which he placed 3rd among 60 racers!

Clodagh Mellett and Kelsey Van Allen showed amazing poise and strength in their first Sea Otter in the 15-18 Category 2 competition. Since their races were later in the morning they had to contend with ever increasing temperatures, 19 miles and 5 grueling hills the likes of which they haven’t seen in any of the Norcal Freshmen races to date. Despite these challenges they rose to the occasion, coming in 12th and 15th and notching more amazing race performances under their belts.

The Pollack/ Bakers were there to cheer on the racers, along with Rob Mellett, Mike Van Allen, Roger Howard and Patrick LePelch who raced in their age categories and put themselves out there in the competish’. The families had a great time camping and socializing under the stars and everyone reveled in the multitude of bike category competitions and the amazing array of bike offerings by every bike and parts vendor imaginable.