Tam fielded 4 teams of three at the annual Boggs 8 hour held at Wente Scout property outside Willits.  Thanks to the very generous sponsorship of Greg Allen Tam had 4 strong teams.

Julian and Liam defended their 3rd place result from last year, teaming up with Kaveh (who replaced Den as the third rider). These “boys” raced in the mens division “putting it down”, each posting incredibly fast lap times (4 laps each of 9 miles). Kaveh showed great  poise and stamina, helping the team get on the podium. Julian posted the fastest lap time of 41:02. 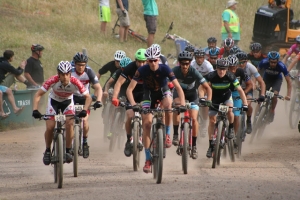 Here is a podium shot of Liam, Julian and Kaveh and well deserved applause from the crowd. 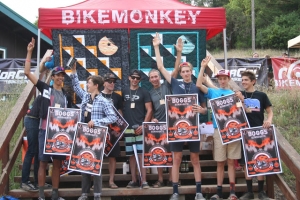 Other Teams did well, although were on track for better results.

ZiggyStardust (Hobey, Sean and Sal a friend of Sean’s) were on track for 10th place until Hobey suffered a flat and they could not recover on the last lap. They came in 16th place. Another team with Zach, Nate and Patrick came in 15th. Felix, Travis and Greg came in 29th out of 45 teams. Had Greg not suffered an Achilles injury on a fall on the last lap, they would have been in the top 12 or 13. We’re wishing you a speedy recovery Greg….sorry this happened on the last lap of the last race of the season.

All in all it was a great result for the Tam riders, coaches and ride leaders in this very unique event at a beautiful venue and an awesome course.

Our fantasy is that this course might be used for Norcal events if the Boy Scouts are open to the idea!

Here’s the lineup at the start…Quite a field! 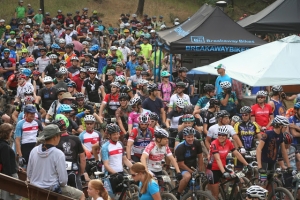 Please check out the two new articles in the Tam News:
The first is about the teams’ success this year:

and the second is about Liam Howard and his involvement with Bear Development Team and the Tam High Team:

Thanks to all the photographers for taking great shots at all the events and to Mike Van Allen for putting together this awesome compilation of the season.

First off, I want to wish everyone going up to Boggs a great race!  I’m really bummed to not be making the trip with you this year.

For those of you who haven’t done this event before, or even if you have, I want to give you all a few words of advice from someone who has done this a few times.

–  First off, pacing yourself is super important.  Do NOT pace yourself for a single 6 mile lap and count on recovering for the next one.  I highly suggest you back off somewhat on your first lap.  If you find that you haven’t pushed hard enough, you will have lots of time to push later on.  If you go too hard early, you will not be enjoying the rest of the day.  Guaranteed.  Once you get into your second lap, you are going to have a much better sense of whether or not you can go a little harder, or maybe you’ve hit  it about right.  It is hard to let a faster rider pull away from you when  you are holding back and know you “could” keep up with them.  But either that rider is faster than you and is pulling away despite holding back also, OR they are going too hard and will pay for it later.

– In between laps I have a routine.  First thing, I roll up to the car, clean and lube my chain (every lap!), then if anything else has been bothering me on my bike I will look into it then.  If you have a problem, you want the most time possible to deal with it.

– After taking care of my bike, I eat.  Every break.  I like to get  a mix of protein, and complex carbs.  I avoid sugars, GUs etc.  I personally like things like cottage cheese, yogurt, bagels, protein shakes, and PB&J sandwiches.  You know better than I do what foods are okay for your own stomach.

– Know how fast your teammates are doing their  laps so you know about how much time you have.  This is hard on the first lap.  Try to arrive at the start about 5 minutes before you think they will finish their lap.  About 15 minutes before I think I need to be at the start (20 minutes before I expect them to actually arrive) I start riding around slowly.  Just getting my legs moving and the blood flowing.  This isn’t really a warmup.  You don’t need to do much.  Sometimes this can be done near the start so you can keep an eye and ear out for your teammate.  Don’t tire yourself out warming up.

Drink a lot in between laps.  Drink just before your start.  Use fluid replacement additives with electrolytes etc.  You will be losing everything during the course of the day.  Think about your salt intake.  Don’t carry more water than you will need for a 6 mile lap.

For what it’s worth, when I would do the two man team, we would get in about 6 laps each.  My third or fourth lap was usually my hardest.   The end seems really far away and  my legs felt bad and sometimes started to cramp.  Then I would feel BETTER on the later laps.  I don’t  know why, but don’t despair if you aren’t feeling good mid race.  It happens.

UPDATE:  The laps at Wente are supposed to be in the 11 mile range.  This means that a rider on a three person team should plan on riding three laps, though the first rider(s) on the faster teams could get in a fourth lap and the late starters on some teams may end up with only two.

Thank you again to Dipsea champions Roy and Jamie Rivers for joining us at the end-of season party. Here is the priceless photo of the first ever Mt Tam mountain bike race in the late seventies of Roy in jeans following two other mountain men up a brutally steep hill. 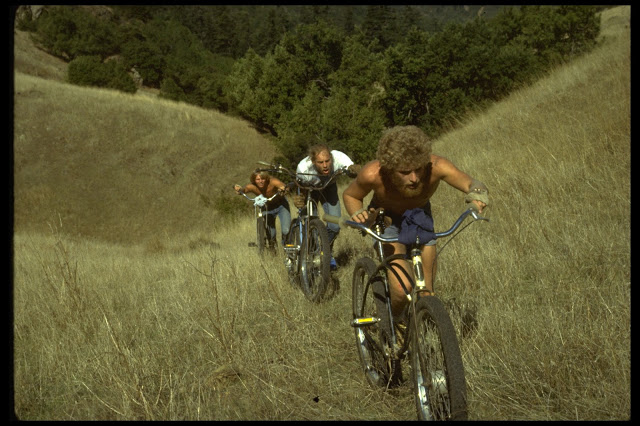 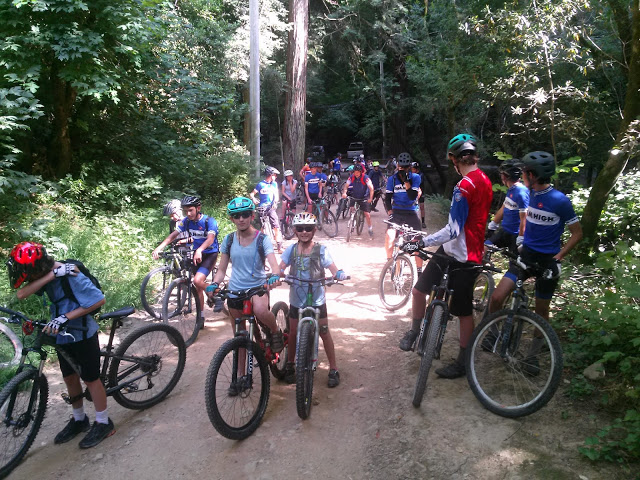 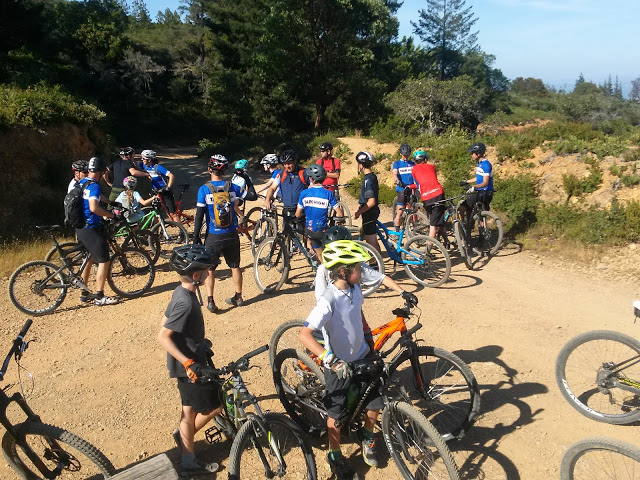 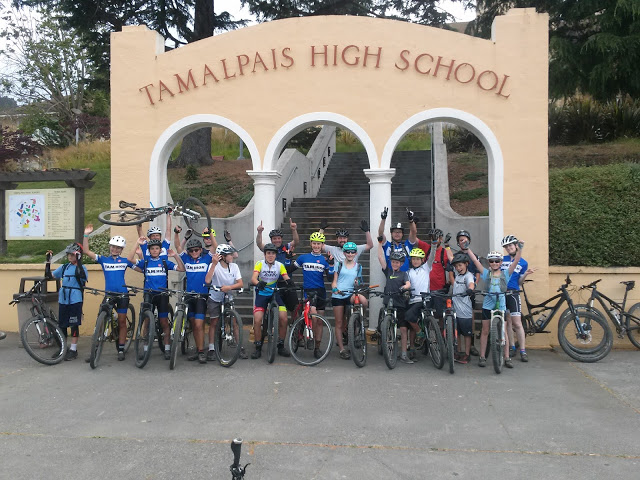 Next Wednesday at 3:30 at the school.

Sadly, its the last official ride of the season. But let’s make it a memorable one! We will be riding with the middle school club. They are potential future team members so we want a good turnout from our team with your team kits.

Be accommodating and personable and chat it up with them. They will be looking up to you as role models and mentors, so let’s ride and integrate with their group. BE SOCIAL. Ask questions (some of them have been participating in the Summit Shorty race series for example, ask them how long they’ve been riding, how they got started, how many rides they do a week, etc.), ask them if they have any questions for you!!

This is a fun ride but also a recruiting effort for our team for next year and beyond.

Thanks for attending the party!

A great way to end the season. Thank you to everyone who assisted and participated!

Team ride 3:30 from the school to Ian Pratt’s house which is the party location.

This is an easy, no-drop team ride today lead by Ian Pratt and Den. If you have a bag or change of clothes you want to have taken to the party,  just bring it to the ride and I will drive it up to the party location.

Have fun and see you this evening!

Here are the photos:

Congratulations to Clodagh, Kaveh and Julian for their individual State Championship medals!